The Issue with Explicit Adult Internet Content : When, Not If

If you have kids, grandkids, nieces, nephews, friends with kids, or just haven’t been living under a rock for the past few year, you probably know about the popular mobile app Snapchat.  I probably receive more questions about Snapchat than any other digital platform due to its questionable reputation.  So here are my two cents:

If you are unfamiliar with Snapchat, simply stated, Snapchat is a mobile only application that allows users to capture a picture or video and send it to their friends to view for a set duration of time (1 – 10 seconds), and then disappear forever.

As with any form of social media, Snapchat can be extremely fun when used in the right context, or downright explicit when abused.  The fact is, Snapchat has inadvertently become one of the largest distributors of inappropriate content on the internet.  Teens find comfort in the fact that they can send sexually suggestive or even blatantly explicit photos to each other via Snapchat and have them simply disappear forever.  But do they really disappear?  Snapchat says yes, but other sources have indicated otherwise.  I want to be clear here, I don’t believe Snapchat in inherently a bad thing.  I actually believe the contrary.

Snapchat offers a glimpse into a moment versus a post that is generated, published, and left on the internet to be judged for eternity.  One of the biggest conditions that exists in the realm of social media is the “like” factor.  For teens that battle low self esteem or image issues this can present a potentially damaging situation.  If you put yourself into the shoes of an insecure high school student seeking validation through social media, what would be your ultimate pathway to relevancy?  Likes.  Who liked my picture? Are they popular? How many likes did I get? Why don’t I have as many likes as Becky? And blah blah blah.  Sadly, in our society there are also adults who have yet to overcome this mentality.

Snapchat has no real system of likes or ranking.  The only feature that remotely resembles a ranking is your list of best friends, who are the people that you communicate with most often.  This like-less system allows teens to share moments with their friends without the pressure of gaining approval from their peers.  All this being said, I think when used responsibly and, and this is a big and, monitored by a parent, Snapchat can be a great way to keep up with friends.  There are plenty of level headed teens that use Snapchat as their primary means of appropriate communication with friends.

Snapchat seems to offer something up to its younger users that Facebook, and many of the other social media platforms, have made a bit more complicated…privacy.  Privacy, especially in the land of teenage angst, is of utmost importance.  When I refer to privacy here, I am not speaking of privacy in the sense of hiding things from parents and other trusted adults.  While kids may want that during their teenage years, I firmly believe that they need to be monitored, especially in the digital arena.  Privacy for teen means a certain degree of anonymity, which essentially boils down to the ability to control who can see what.

I believe that most young people, and there are exceptions here, don’t want to put all of their social media content on blast all the time.  They, in fact, want to be able to more precisely control the distribution of content based who they are closest to in their peer groups.  Not all of their followers / friends, who, lets face it, are probably more like acquaintances, are participants in their daily lives. Their social media networks are vast and ambiguous, especially considering that the new form of social etiquette is to immediacy follow someone on social media upon being introduced.  Snapchat is an active distribution system versus something like Facebook or Instagram that is passive in nature.

What most teens don’t consider at this stage is the fact that Snapchat actually provides a certain degree of privacy for them later in life.  Let’s use Facebook as an example:

Say I am tagged in picture on Facebook from 2004.  Realistically speaking, that picture is probably still on Facebook.  What was I doing in 2004?  Odds are it was something completely inappropriate during my college years and that may not be something that I want the whole world to see at this juncture in my life.  With employers now checking social media more and more as preliminary intel gathering on potential candidates, this could be problematic.  So, I have one of two options:  first, I go back and untag myself from every post that I deem unsuitable, or second, I leave social media behind and hope that no one stumbles on the remnants of my former life.  In both of these scenarios there are no guarantees.

Sure, there are privacy settings on Facebook that allow users to limit who can see content and what is distributed for public consumption.  There is also the philosophy that you just don’t do questionable things and post it to social media (to which I failed miserably) and no one will ever see it.  Kids are going to make mistakes any way you look at it.  I’m sure if we took a poll we would all have a couple of things from our adolescent years that we were not super proud of.  Much like the mischief that we got into as youngsters, this generation is doing the same stuff.  The difference, however, is they all carry around cameras with a data connection that allows them to broadcast anything across the globe within a matter of seconds.  We can always preach the message “don’t do what I did,” but how effective is that?

A platform like Facebook keeps a record of all that we have ever done and posted to social media.  They data mine information and trade it with other companies and other social media networks to “understand” our habits and quirks.  These companies honestly know us better than we know ourselves at times.  So as parents, do you really want your child’s entire history to be categorized and available to the world.  I have not been blessed with kids yet, but I can personally say that I would answer that question with a resounding NO!  Platforms like Snapchat, again, when used responsibly, offer what Facebook and other social media platform cannot.  By being an active moment by moment distribution system with no record of previous posts being publicly available, Snapchat provides much more protection for our kids as they get older.

As it stands currently, 68% of Snapchat’s users in the US are between 18 and 24 years old.  Realistically speaking, the age range is probably more like 13 – 24 years old.  These younger generations are shaping the future.  They are shaping how we communicate and interact with each other.  Whether we want to admit it or not, the older we get the more obsolete our methods of communication become.

This helps answer a simple question: Why, with their bad-boy reputation and youthful exuberance, is Snapchat showing growth among people in the 25 and older crowd?  The answer? Snapchat is fulfilling the Facebook prophecy whereby parents begin to descend on social networks that are used by their kids.  After all, this is really how Facebook was able to gain momentum and become the powerhouse that they are today.  Some critics, including this one, say that the parental flock to Facebook actually drove their children away from the social network seeking something more private with less exposure to prying eyes.  Again, by no means am I an advocate for parents not knowing whats going on with their kids social media accounts, but I am also aware of our teen’s wishes to keep their family life and social life separate during this stage of life.

Whether it has to do with prying parents or just simply older folks jumping on the bandwagon, Snapchat is indeed growing.  My personal belief is that parents should be active on the same social media networks as their children.  Monitoring social media accounts, especially Snapchat is crucial when teaching our kids about appropriate digital behavior.  Fact: Snapchat can and will be abused by both teens and adults.  This doesn’t necessarily mean that it is a bad platform or something that cannot be used with the proper restrictions in place.

I often advise parents to start their kids off with a short list of same gender friends on Snapchat.  Due to the active nature of the app that I discussed above, kids don’t need 1 million Snapchat friends.  Have them pick their 5 closest friends and add them.  I generally exclude direct or extended family members from this list.  Snapchat is a great way to keep up with siblings, cousins, aunts, uncles, etc. that live far away.  I do, however, issue an exception to this in the case of siblings or cousins that are in college and may not be sending the most appropriate pictures of their social life while away.

Starting small is the key to earning trust and showing responsibility with a social media platform.  Be sure to monitor their friends list and how often they are communicating with them.  If the list suddenly grows without permission, bye bye Snapchat.  If they add a member of the opposite sex, uninstall the app and try again down the road.  Remember, chances are they are using a phone that you purchased and a cell phone plan that you pay for.  At the end of the day, that is your property.  My dad used to tell me “we live by the golden rule: them with the gold makes the rules.”  Until they pay their own cell phone bill and buy their own phone, that device is yours and you are allowing them to use it.  As they get older I believe that it is important for them to be able to grow their network in small increments.  How small those increments should be is up to you and should be based on how much responsibility they have shown to that point.

I am a firm advocate for no mobile devices with an active internet connection being allowed behind closed doors.  This is not limited to Snapchat, it should be a house rule.  Setup a charging station in a common area and make sure the devices stay there all night.  If you find that your kids are sneaking the devices into their rooms after you are asleep, move the charging station to your bedroom, bathroom, or closet.  They have no reason to be communicating with anyone past bedtime.

Lastly, interact with your kids on Snapchat.  Send them goofy pictures from work or the grocery store or something.  As you begin to reach out to them, they will begin to get more comfortable with the idea of you interacting with them on social media.  This also serves as a friendly reminder that someone is watching to make sure they are behaving appropriately.  The most important thing here is to be engaged with your kids on social media and take an interest in what they are doing.  It will also give you some great talking points in the car on the way home from school.

For more information on Snapchat or anything else technology related, please email me and I will be happy to set aside some time to visit with you.  If you are looking to better secure your family’s technology, we would love to help.  Check out our family page or visit southernrootsmedia.com/family/ for more information. 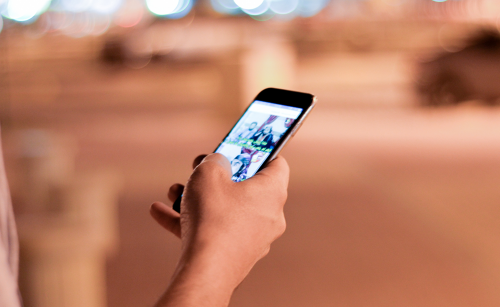 The Issue with Explicit Adult Internet Content : When, Not If